The Firm You Go to When the
Stakes Are High 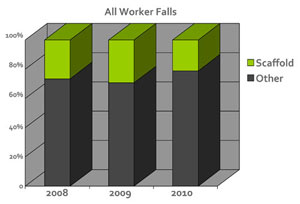 Many of these scaffolding accidents involved immigrant construction workers who lacked proper training and supervision. Furthermore, on many of the job sites where these accidents took place, the building permits were not in order. Improperly maintained scaffolds, sometimes leading to scaffolding collapses, is often one of the main causes of construction-related work injuries.

When an organization does not take adequate safety precautions to ensure the well-being of its workers, it may be held responsible if an employee sustains serious injury as a result of the company’s negligence. Furthermore, if a worker is injured from a scaffolding accident, he or she, with the help of experienced construction accident lawyers, may file a lawsuit against people or companies, besides their employer, if those parties contributed to the accident due to the failure to maintain a safe working environment. For example, responsible parties may include: contractors, sub-contractors, equipment manufacturers, tool manufacturers, landlords and materials suppliers.

IF YOU OR A LOVED ONE WERE INJURED IN A SCAFFOLDING ACCIDENT, YOU MAY BE ENTITLED TO MONETARY COMPENSATION. THE NEW YORK AND NEW JERSEY SCAFFOLD ACCIDENT LAWYERS AT LEVY KONIGSBERG LLP OFFER EXPERIENCED LEGAL REPRESENTATION FOR WORKERS WHO HAVE BEEN INJURED IN A CONSTRUCTION ACCIDENT. FOR MORE INFORMATION, PLEASE CONTACT ALAN J. KONIGSBERG AT (800) 315-3806.

A TEAM COMMITTED TO DOING WHAT IS RIGHT

Find out whether you have a case by speaking to one of our experienced lawyers via our 24/7 toll-free hotline or by submitting an email inquiry. Our attorneys will be quick to respond to you and happy to answer all of your questions.